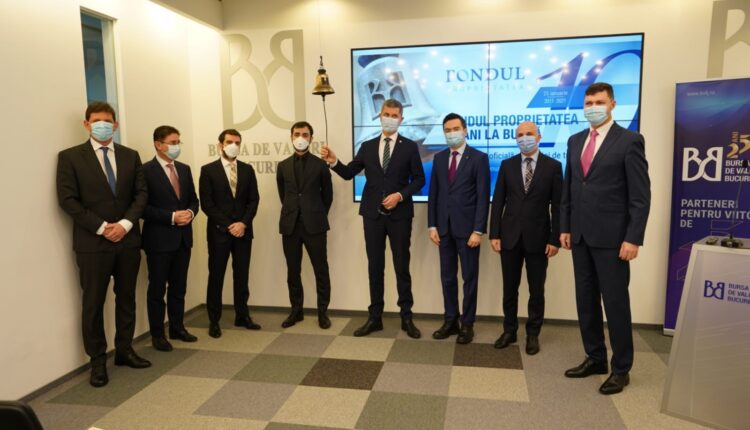 10 years since Fondul Proprietatea has listed on BVB

Fondul Proprietatea (“the Fund”) celebrates the tenth anniversary of its listing on the Bucharest Stock Exchange.

Commenting on this key milestone, Piotr Rymaszewski, Chairman of Board of Nominees of Fondul Proprietatea said: “The Board of Nominees commends the efforts of Franklin Templeton as Fund Manager of Fondul Proprietatea over the past 10 years. The Fund has not only generated excellent returns for its shareholders, but has also, under the professional and diligent stewardship of the Fund Manager, made a significant contribution to the development of the capital market in Romania. The Fund Manager’s efforts to improve corporate governance and transparency at its investee companies have had a very positive effect on the local equity market. The Fund’s Board of Nominees, in cooperation with the Fund Manager, has led the way in this regard and it continues to believe that this unwavering focus will benefit all stakeholders well into the future.”

Commenting on the 10-year anniversary, Manraj Sekhon, Chief Investment Officer, Franklin Templeton Emerging Markets Equity said: “Fondul Proprietatea has proven to be a great success story for Romania, the Fund’s diverse range of partners, and Franklin Templeton as the manager. We greatly value the engagement and support of the Fund’s shareholders, co-shareholders in the portfolio companies, the Bucharest Stock Exchange, the Financial Supervisory Authority, and various other contributors in Romania. Another valuable partner has been the London Stock Exchange, where the Fund had its successful secondary listing. We continue to have great faith in the long-term potential of Romania and are looking forward to further partnership with the new Government to deliver more years of success. Importantly, Fondul also provides a useful model for other countries to help build true long term social and economic sustainability, with the collaboration of many stakeholders.”

Johan Meyer, CEO of Franklin Templeton Investments Romania and Portfolio Manager of Fondul Proprietatea added: “I strongly commend the commitment, dedication, and resourcefulness of the Franklin Templeton team in Bucharest, who have navigated numerous challenges with resilience and determination. The push for positive changes across the Fund’s portfolio companies has unlocked significant value over the past decade. It has been a rewarding journey, in which the team has innovated, opened new avenues, and helped contribute meaningfully to the progress of the local capital market. We thank all our partners for their outstanding collaboration and support over the years. We look at the future with excitement, optimism and achieving continued success in Romania.”

Under the stewardship  of Franklin Templeton, Fondul Proprietatea has been widely recognised for being an activist shareholder, upholding minority shareholders rights, pushing for corporate goverance in SOEs in spite of resistance, taking public stands against unreasonable and anti-competitive business measures, as well as for introducing new instruments on the capital market.

Since its listing, the Fund gave a continuous boost to the Romanian capital market and contributed significantly to its development:

Delivering on its key objective, FP has generated substantial value for its shareholders since its listing:

“Fondul Proprietatea remains fully committed to continue delivering returns for its shareholders. It will continue to advocate for and closely monitor the implementation of corporate governance standards in its portfolio companies, with the objective of further facilitating progress of the local capital market.

To this end, the Fund is prepared to support the listing of state-owned enterprises in the near-term by contributing to the process a part of its stakes in IPO candidates, such as Hidroelectrica.

The pipeline of listings from the Romanian Government and Fondul Proprietatea has the potential to be a huge catalyst for attracting more investors to Romania, building on the track record of improved corporate governance and transparency. This is the necessary key to unlock the full potential of Romania’s capital market and secure an upgrade to MSCI Emerging Market Status, while at the same time helping the country’s recovery process from the impact of the pandemic,” says a press release.

Connections Consult lists as AeRO company, finances its expansion in the USA through…

Romania-based NGO among the recipients of the 2021…

Vaccination against Covid-19 with the third dose to kick…

What Are the Three Main Purposes of a Report Writing?