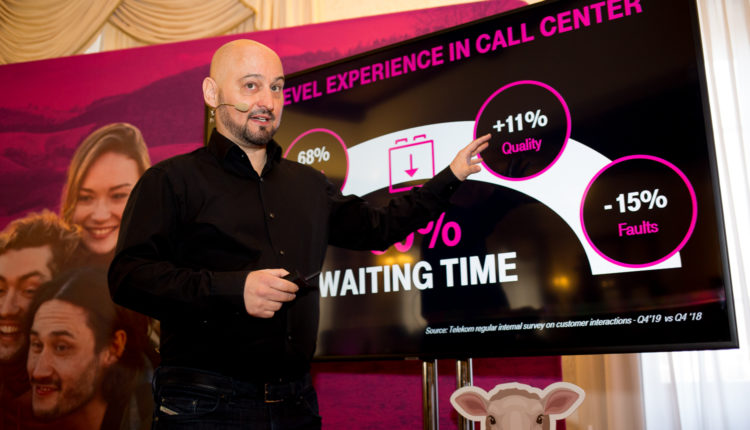 Telekom Romania brings brand new offers for those who port in. Vodafone’s Ghita the Shepherd ports his mobile number to Telekom

According to the porting results for 2019, announced by the National Authority for Management and Regulation in Communications of Romania (ANCOM), Telekom Romania group of companies ranked second in the portability top with more than 249,000 mobile phone numbers ported into the network, the representatives of Telekom Romania announced in a press conference on Monday.

One of the surprises announced at the conference was Ghita the Shepherd (the protagonist of a well known Vodafone’s brand campaign for years) porting his mobile number to Telekom Romania. 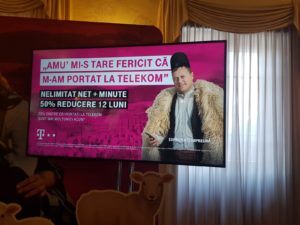 “I’ve heard about him coming to Telekom, so good news travel fast. He loved to join us. Each customer decides by him/herself. I read about him in the Guardian, so I wouldn’t care about what he did in the past”, said Elsner when asked if Telekom doesn’t fear that Ghita is strongly associated with Vodafone in the public mind.

“So, now with Valentine’s Day coming, we invite customers to break up with their old operator and join us”, the Chief Commercial Officer commented in a spirit of joke.

70% of the Romanians who ported into Telekom Romania’s network said that they are more satisfied with the telecommunications services they are using now, showed the results of a survey conducted by Telekom Romania in November 2019.

The volume of mobile data, minutes and SMS included in the mobile phone subscriptions, quality of the signal, internet speed, price, as well as the quality of the interaction with Telekom employees were among the factors assessed positively by the new Telekom Romania customers.

Starting from the most appreciated benefits by the Telekom customers – unlimited internet, price and quality-price ratio- the company is launching the new commercial offers for those who will port into Telekom’s network, starting from today, February 10th 2020. They can purchase Mobil 6 subscription with 50% discount in the first 12 months and will only pay 3 euro/month (approximately 14 lei/month) during this period. After the 12 months, the cost of the subscription will be 6 euro/month.

Also, Romanians who will port into Telekom Romania’s network will be able to also opt for the acquisition of a mobile phone in installments, without interest and without downpayment. One of the smartphones available in Telekom’s offer is Huawei Y6s. Those who will purchase this smartphone with Mobile 6 subscription will only pay 7 euro/month (approximately 33 lei) in the first 12 months from the port in: 3 euro/month for the mobile services and 4 euro/month, the cost of the installment for the mobile phone. After this period, the total cost will be 10 euro/month.

“Mobil Nelimitat is the concept that recorded the best performance in the mobile services segment at the end of 2019. For us it is clear that this concept is making our customers satisfied and this is why we have prepared a new offer with unlimited benefits and a significant price discount, 50% in the first 12 months. This is an offer with benefits and a price that will definitely make more satisfied the customers who will port into our network and will help them leave behind all the worries and frustrations related to the telecommunications services”, said Andreas Elsner, Chief Commercial Officer, Residential Segment, Telekom Romania.

The new commercial offers of Telekom Romania are available between February 10th – March 29th 2020, in case of contracts signed for 24 months and address customers who will port into the company’s mobile network and have one fixed service from Telekom Romania.

Mobil Nelimitat scores best performance in the mobile segment in 2019

Telekom recorded 217,000 customers for Mobil Nelimitat, at the end of December 2019.

The surveys conducted by Telekom Romania between July-December 2019 have revealed that most of the new customers would recommend Mobil Nelimitat due to the unlimited benefits, good prices and accessibility, both through Telekom shops and website, as well as through any Mega Image, Shop & Go and Carrefour store, following the partnerships signed by Telekom Romania with the retail networks.

No price hikes this year

At the same time, Telekom Romania CFO pledged that no price hikes will take place this year, after the increase announced as of March.

Andreas Elsner explained that the increase to come into force as of next month, as well as other previous ones were necessary because ‘Telekom’s margin is extremely thin in Romania‘. He said increases were also due to electricity’s growing prices and because the operator had more costs with the clients than profit, and that was no efficient.

“I don’t see any price increase anymore this year, unless there is big surprise, such as Government’s potentially enforcing new taxes or others. On the other hand, we are not here to lose money either, but to be profitable and stay”, the Telekom representative concluded.

DAYS OF CONFUSION at DarkSide Nights – Acoustic Side Of, this February

Damen Group to lay off 870 employees in Romania