Despite the chaos across the polling stations in Diaspora, when ten of thousands of Romanians did not manage to cast their votes although they had been queuing for up to 7-9 hours, FM Teodor Melescanu refused to take responsibility for this situation, saying he has nothing to reproach to himself, blaming on the high turnout.

“Things have been more difficult for there was a high turnout. We estimated only 30 percent turnout”, the minister argued.

Asked if he is resigning following this scandal, Melescanu replied: “Resignation is not up to me, is up to the party, to the government. I Okayed a double number of polling stations, how many should I have done? What is my fault in all these?

I convey my direct and sincere regret that some could not exert their right to vote and I assume all political responsibility for this”.

Teodor Melescanu resigned on November 2014 after an eight-day term at the helm of the Foreign Ministry, after the row of many Romanians in Diaspora failing to vote in the runoff of the presidential elections.

An impressive number of Romanians living and working abroad have come to polls on Sunday to vote at the European elections and at the referendum for justice. Unfortunately, the polling stations were insufficient, and problems were also encountered on the scarce voting stamps, ballot papers or boxes, so that a considerable amount of people did not manage to cast their votes.

In some cities, angry Romanian voters forced the entrance of the embassies to be able to exert their right to vote, like in The Hague, while others were peacefully chanting “We want to vote!”.

Local police forces were deployed on the scenes, in some areas they helped voters  close ranks and and directed the line, while in others police intervened in force.

In The Hague Romanians have jumped off the fence in the embassy’s courtyard and tried to break down the door of the polling station inside the embassy, but the Dutch Police was called on the scene and intervened to disperse the crowd.

In Munich on the other hand, police helped Romanians by taking special measures to make sure they will vote. German policemen have installed fences around people, to mark that it is the territory of the consulate and that the Romanian electoral law should be observed and all remaining people must vote.

According to journalist Vlad Ursuleanu, one of the policemen in Munich who took the initiative to keep voters in a perimeter “is born in Brasov and addressed the crowd in Romania”, Digi24 reports.

People were thus allowed to vote for one more hour, but unfortunately, despite these efforts, the voting system has been shut down from Bucharest at 9 p.m.

Tanita Man, a Romanian young physician settled in Munich said she could not vote despite having waiting in line for 11 hours.

“We have been almost 1,000 people who did not manage to vote. I am totally disappointed by the organisation, but I will never give up fighting for Romania, neither should you back home“, she told Digi24. 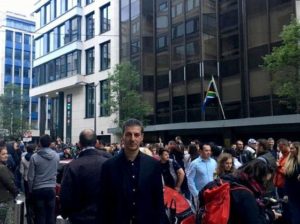 Former Romania’s representative upon the European Union, Ambassador Mihnea Motoc, has also posted on Facebook that he had not managed to cast his vote in Brussels, after having waited in line for three hours at the polling station. Motoc said he was just 10 metres away from the embassy’s entrance when the polling station closed down at 9 p.m. sharp. He had worked at the Romanian diplomatic mission in Brussels for seven years.

“I am insulted by the surprise of those who refuse to understand that a great part of Romania is living elsewhere and that it might want to voice their voting options as much as those in the country,” he wrote, also mentioning „the unjustified humiliation of the astronomic queues” and „the indignation” of not being able to exert the elementary right to vote.

Motoc accused that resources for the voting procedure in Diaspora should have been based on the expectation that people would want to come to polls, not on a low turnout.

Bucharest mayor Gabriela Firea says she does not want to run for president. Tariceanu: Analysis is needed

Ukrainian President: Northern Bukovyna was taken by Romanians 100 years ago

Where does Romania stand in the Transparency International’s Corruption Index?