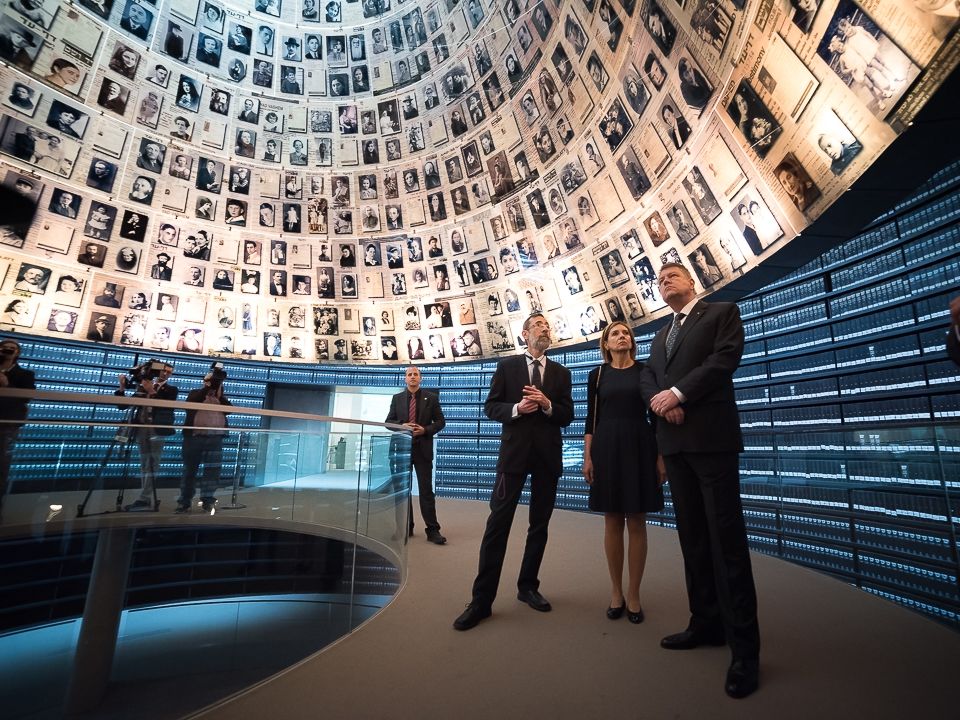 Romanian President Klaus Iohannis visited the Yad Vashem Holocaust memorial on Tuesday and has announced his support to open a Holocaust and Jewish people memorial in Bucharest.
“By rejecting the anti-Semitism, xenophobia, racial hatred, discrimination and intolerance it means we start with the solid knowledge of historical realities that resulted in such atrocities. As President of Romania I will plead for building such a museum in Bucharest. I am fully determined to support the opening of a museum of Jewish people and Holocaust in Romania. I will discuss with the Government in order to have a concrete plan as soon as possible,” the President said on Tuesday.
The President confessed that his visit to Yad Vashem was a touching and emotional experience.
The President was accompanied by his wife Carmen Iohannis and by the official delegation including Education Minister Adrian Curaj and FM Lazar Comanescu.
The President’s agenda on Tuesday included meetings with Israeli Opposition leader Isaac Herzog, chairman of the Labour Party, with Knesset Speaker Yuli-Yoel Edelstein, and a visit with the first lady to the Romanian Orthodox Church in Jerusalem.

After the talks with Parliament Speaker Yuli Edelstein on Tuesday, the Romanian head of state stressed the importance of fighting terrorism and of the efforts to combat the spread of terrorist ideology. Furthermore, President Iohannis said that “the peace process in the Middle East is of top interest for us, within the context of the evolutions in the region with major consequences on the European countries. Romania supports the efforts to find lasting and comprehensive solutions, meant to meet the Israeli and Palestinian demands, and to offer peace and security as well as free development of the states.”

COVID-19 infections, slightly on the rise again in Romania

CCR: The Parliament will decide the date of elections, not the Gov’t

Health Ministry to test over 29,000 Romanians for COVID-19 antibodies during…

Record booking in Romania during the COVID-19 pandemic:…