President Klaus Iohannis welcomed on Tuesday, at Cotroceni Palace, his Egyptian counterpart Abdel Fattah El-Sisi, who is paying an official visit to Romania.

The Egyptian head of state was welcomed at Cotroceni Palace with military honours, the Presidency informs.

The two presidents are expected to have tete-a-te 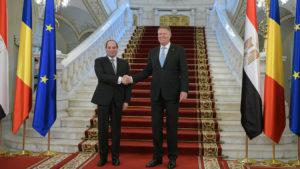 te talks and official talks, with a common press conference at the end.

The Presidency informs that the two heads of state will assess the actual possibilities to speed and deepen bilateral cooperation in all fields of joint interest, mainly in the economic field.

“The official visit of President Abdel Fattah El-Sisi reflects the soundness of the bilateral relations, as well as the fact that Egypt, important player in ensuring the regional stability and security, is one of the traditional friends of Romania in the region,” the Presidency also informs.

European Commissioner for Justice Vera Jourova: Romania is not facing the triggering of Article 7

Dacian Ciolos, chairman of the new Liberal group ‘Renew Europe’ in the EP

Ambassador Zuckerman: U.S. will not wave visas for Romanians too soon

Ukrainian President: Northern Bukovyna was taken by Romanians 100 years ago

Risk for coronavirus to reach Romania is low, healthcare…

‘Henri Coanda’ Airport in Bucharest, among…