A former head of the Department for Intelligence and Internal Protection (DGIPI – the Interior Ministry’s intelligence service), Gelu Oltean has been arrested for 30 days in a file related to drug trafficking.

He is charged with conspiracy to high-risk drug trafficking in a file investigated by DIICOT Brasov. Gelu Oltean, his mistress and a British citizen are accused of hosting meetings for drug consumption.

“The three used to host sessions where participants used to take DMT- dimethyltryptamine, a high-risk drug which contains Ayahuasca“, DIICOT Brasov says in a press release. 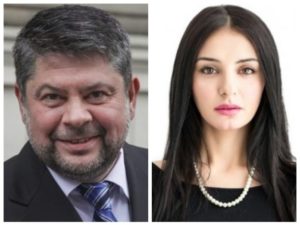 Investigators say that every person attending these sessions used to pay around EUR 500. Tens of such people would have attended the sessions where they used to take drugs.

Gelu Oltean and his mistress, Vanessa Youness (photo right), the owner of a wellness clinic near Bucharest are accused of organizing shamanism sessions where they used a hallucinogenic drug. A British citizen, Thomas Lishman was also detained in this case.

N,N-Dimethyltryptamine or DMT is a psychedelic drug, historically known as being prepared by various cultures for ritual purposes. DMT is illegal in most countries. DMT can produce vivid “projections” of mystical experiences involving euphoria and dynamic hallucinations of geometric forms. It is dubbed as “the molecule of the spirit”.

Police quaestor Gelu Oltean was also criminally investigated in 2016, next to other police quaestors and two chief commissioners, for stealing funds from the DGIPI’s budget.

High school admission and graduation exams might be held in July, simulations and…

10 new born from Timisoara infected with COVID-19 in the maternity ward. Their moms…

Tarom to fly 4 tons of medical equipment from China to…

The first thermal scanner 100% made in Romania produced…