Germany is still an immigrant-friendly country, with Romanians topping the immigration ranking last year among the EU citizens. Romanians were the most numerous immigrants from an EU country to Germany in 2017. 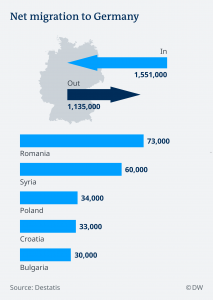 The rise in the umber of Romanians settling down in Germany comes amid a decline of the refugees’ immigration. The number of Syrians, Afghans and Iraqis coming to Germany has dropped  by more than half last year against 2016, mounting to 60,000.

On the other hand, more arrivals from the Balkan countries have been reported in 2017 as against 2016. 8,000 people from Kosovo emigrated to Germany, 6,000 from Macedonia and other 6,000 from Serbia.

111yo man, declared the oldest Romanian citizen from Bucharest and the third oldest…

Romanian, deported from Italy after he had got drunk 73 times

111yo man, declared the oldest Romanian citizen from…

Mariza to be accompanied by five instrumentalists