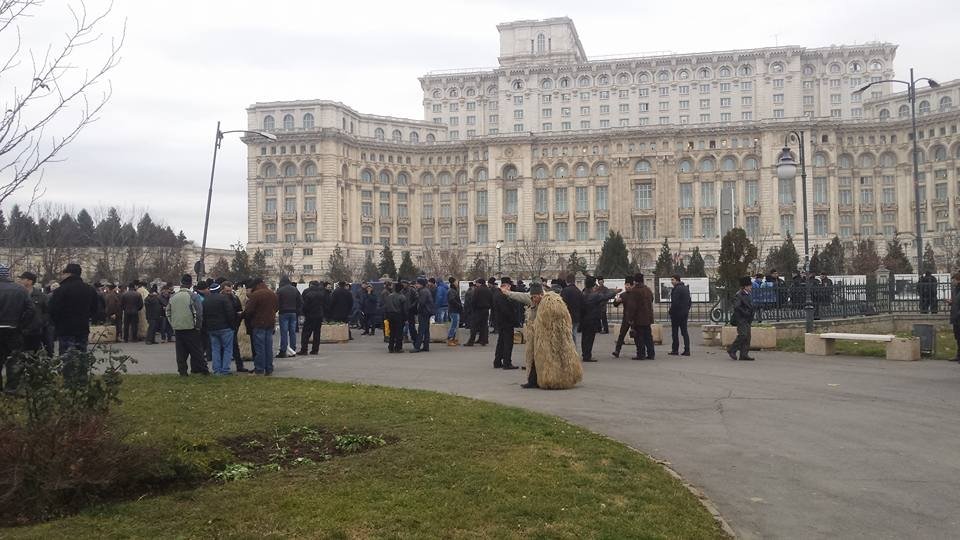 Sheep breeders protest in front of the Parliament, clash with the gendarmes. Gov’t seeks solutions to amend the law

Over 2,500 sheep breeders are protesting in Bucharest on Tuesday, picketing the Palace of Parliament and clashing with the gendarmes. Their protest against the new Hunting Law restricting their activity. They were wearing traditional course-stuff peasant coats and bells.

Some of them forced the Parliament’s gate and managed to get inside the courtyard. A delegation representing them is to go for talks with the parliamentary Agriculture committee.

The protesters also clashed with the gendarmes when trying to break in the Parliament’s courtyard. A gendarme used a tear gas spray to defend himself and he broke one of his fingers during the stampede. The gendarme was rushed to the hospital.

The Parliament’s Agriculture committee is to convene to debate the sheep breeders’ discontent before tabling several amendments to the Labor Ministry. According to the committee’s president, Liberal Nini Sapunaru, the discussions will be only advisory and no decision will be taken. The committee says they invited the breeders’ associations to talks also on Monday, but they refused to participate.

The new provisions of the Hunting Law forbid setting up or harvesting of the cultures without ensuring the protection of the fauna of hunting interest, while also restricting the number of dogs that a breeder might own. Thus, the sheep breeder will be able to keep only one dog to watch the herd at the sheepfold located in the plain, the sheep breeders from the hills are allowed to have two dogs, while the mountain sheep breeders could have three dogs.

The law, which also implements fines up to RON 1,500, has been recently promulgated by the Romanian President.

Gov’t seeks solutions to amend the law. It can’t be done by emergency ordinance

The government is looking for a technical and legal solution for the amendments sought by sheep breeders, but this can’t be done by emergency ordinance, said on Tuesday the government spokesman Dan Suciu.

“The Senate Speaker has called Prime Minister Dan Ciolos regarding this bill and suggested amending it by emergency ordinance. The prime minister said it can’t be amended by emergency ordinance. At this time meetings are taking place between the protesters and the representatives of the Ministry, with Secretaries of State. In no time the government will find a solution that meets the technical and legal requests.

It is a law initiated and passed by Parliament, therefore it cannot be amended by emergency ordinance. A right away amendment can’t be done immediately. Another solution may be another bill to cover the sheep breeders’ claims. The Ministry is looking for a solution like this,” said the government spokesman.

A delegation of farmers has been invited to talks with members of the Agriculture Committee of the Chamber of Deputies.

Survey: 52 % of Romanians think the country is heading in a wrong direction