The Café on the Edge of the World – John P. Strelecky

I’m not a big fan of the “motivational” genre, regardless of the manifestation form: book, film, speech etc. My entry into the “Cafe at the End of the World” was a karmic one – some would say. I think, however, that it is just a matter of not paying attention. So, inadvertently, I confused “library” with “cafe” and “midnight” with “end of the world”. So as, instead of Matt Haig’s “The Midnight Library”, I’ve bought John P. Strelecky ’s “The Café on the Edge of the World”.

Moreover, the beautiful cover aimed directly at my vulnerable points (coffee and travel!). So, here I am, reviewing the book.

Or maybe it’s destiny, considering that this is how I came up with the idea to inaugurate the category “Book to leave on the train” (expression stolen from my teacher, to whom I owe my love for grammar). I hope not to add so many books in this category, during my literary journey.

Going directly to the source (the author’s official website), I find out that, at the age of 32, Strelecky decided to follow his dream and travel the world, a decision unsupported by his friends, who considered him “crazy”. It is not specified whether they subsequently changed their minds or whether, on the contrary, their number increased. When he returned from the trip around the world, he wrote continuously for 21 days, almost in a trance. The ways of grace are tangled… At the end of the spiritual and artistic labor, this book was ready, I quote, “almost word for word.” Despite the refusal received from almost 200 publishers, he printed the book on his own, the author’s perseverance being abundantly rewarded: the book becomes # 1 bestseller on three different continents, being translated into over 42 languages. Later, he writes 6 more books, also sold in 6,000,000 copies. I checked the information from two sources but I feel that I should check in almost 200 so that, later, I can follow my instinct and reject the idea. 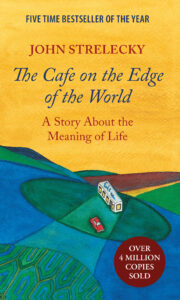 The book has less than 150 pages. Using single row spacing, however, Arial 12 and without white pages between chapters, their number would be halved (according to my calculations, in the 21 days of creative exaltation, the artist wrote, on average, about 4 pages a day). If I also excised the “filling”, I would only review the title. So, reading takes 1 hour, maximum 2 hours if you feel the need for cigarette breaks, even though you have quit smoking for almost a year.

The book is an accumulation of fashionable clichés, it unfolds monotonously and invites you to sleep (not meditate) even if you consume it with a lot of coffee. It is written in the first person and in the preface we are told that the story really happened. So, one night, having gone on a trip to disconnect from the surrounding world to which he no longer felt he belonged, John got lost and arrived at a “mystical” cafe, run by Casey and Mike. The menu is a normal one, but on the back, John finds 3 questions that will revolutionize his existence (forgive me if reading them will spiritually shake any follower of my reviews):

„Do you fear death?”

Once the questions read, there is no turning back; thus, thinking of the possible answers as he eats a royal breakfast (despite the late hour of the night), John begins to consciously bring back the thoughts repressed until then.

The relationship between the first question and the concept of “purpose in life” will be debated, as well as the connection between „the purpose in life” and the fear of death (if only Freud visited the cafe …). The third question leads John to have the revelation that fulfillment and success in life are seen differently by each person and their definition must be made as a result of introspection and not as a result of enrollment in modern society that manipulates and uniforms human beings (“Nosce te ipsum” in the modern version).

Also with amazement, the hungry John (and I mean the spiritual hunger, not the above-mentioned feast) also learns of the need to shape his own destiny in accordance with the law of attraction and the law of resonance (of course, they are not named like this, but my readers will understand). I am inclined, however, to believe that it would have been more convincing if he had spoken about the law of perseverance, given the publication of the book on his own account, despite the refusal received from 200 publishers…

Below, there are some quotes from “The Cafe at the End of the World” (… literary world, if I may), with the warning that, once read, you will never return to who you were before reading them.

„To what extent my definition of success, happiness and plenitude is determined by others?”

“Why is it that we spend so much of our time preparing for when we can do what we want, instead of just doing what we want right now?”

„Without knowing exactly why I am here, and what I want to do, I just kind of do the things that most people are doing.”

‘All Men Do Not Inhabit This World in the Same Way’: The world could be…

‘The Angel’s Call’ By Guillaume Musso: A story like a montagne russe