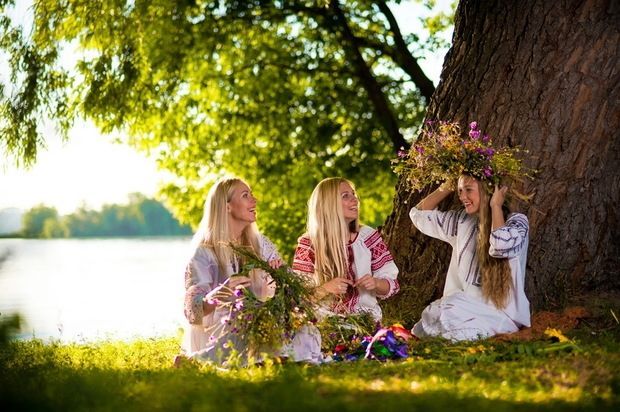 The magic of Sanziene: a Romanian pagan tradition

As Romania marked the summer solstice on Sunday, June 21, celebrating the longest day of the year, another tradition is getting near, Midsummer Day (Sanzienele), a pagan tradition marked on June 24.

Sanzienele are celebrating the love, sun and nature, but also the fertility, originating in an ancient solar worship related to rituals officiated for the people’s health and for prosperity in the household. Also known as “Summer Head”, Sanzienele is also related to customs through which girls can find their true love or the moment when they will get married.

In Romania the celebration evolves around the Summer Fairies, called Sanziene in Romanian, hence the Romanian name for Midsummer: “Sanziene”or “Dragaica”.

The legend says that Sanzienele are amazingly beautiful girls, fairies, who live in forests or in the fields. They are said to be part of the Iele family, gracious fairies with magical powers. Unlike the most of Iele, who can be mean and evil, Sanzienele are always good and kind to humans.

They start a round dance called ‘hora’ while bringing flowers and weeds to life, turning them into miraculous medicinal plants, good for healing all diseases. This happens on the night before June 24, when they are flying over meadows, smelling and touching the wildflowers, enriching them with special healing properties.

The dance is performed by a group of 5-7 young girls, with a chosen one called Dragaica. She is dressed as a bride, wearing a wheat wreath on her forehead, while the other girls are dressed in white.

On the eve of June 23, girls used to pick yellowweed flowers on the fields and made wreaths that they threw over the roofs. At night, the girls who want to get married join the young men who want to wed.

Older people are also throwing garlands over the roof to find out when they’ll die. There’s the belief that when the garland will fall from the roof, death is near.

Another folk belief is that during the Sanziene’s Eve night, the heavens open up, making it the strongest night for magic spells, especially for the love spells. Also it is said that the plants harvested during this night will have tremendous magical powers. Hence, the celebration is linked to paranormal events reported during this time of the year. According to popular beliefs, strange things, both positive and negative, may happen to a person wandering alone on Sanziene night.

According to ancestral tradition, on Sanziene’s Eve, it is said that the fairies bless the animals and the fountains, strengthen the marriages, heal people of different diseases and then like to dance and sing until dawn.

Feast of Midsummer Day used to be a true ceremonial in the countryside in old times. After dark, men and boys used to go on the hills carrying torches that they spin around making them burn and spark intensely. After midnight, when torches are almost burnt out, they would go down the hills, where girls and women joined them. They build a bonfire and jump over it for good luck.

According to the peasant tradition, this day is very important for weather forecast. There is a popular belief that if it rains after Midsummer, the next 40 days will be rainy. Some say on this very night, as on Christmas night, animals can talk or if clothing, carpets and bedding are exposed to the sun on June 24, they will not be eaten by moths. They also say if you pick and eat at a wheat flower petals, called Blue (Albastrica) at midnight, you’ll have good luck all year long.

Sanziene is also the Romanian name of a wild yellow flower, commonly known as the Lady’s bedstraw, frequently used in ancient healing potions.

Museums across the country are ready to celebrate Sanziene as well. ‘Dimitrie Gusti’ Natinal Village Museum in Bucharest is opening its gates on Wednesday, June 24, as of 11:30 with events focused on this holiday: visitors will be able to wreath crown of Sanziene flowers, and to enjoy the handmade products within the fair. Creative workshops will be also available, with visitors being taught to make wreaths of flowers and sew motifs on the Romanian ‘ia’.

The visitors who will come wearing Romanian ii/ Romanian blouses will have free entrance.

Will a New Big-Screen Take on Dracula Give Romania a Tourism Boost?

Mastering The Music Business is back in a new format

President on the record number of COVID-19 cases:…

Survey: What are the biggest fears of the employees back…