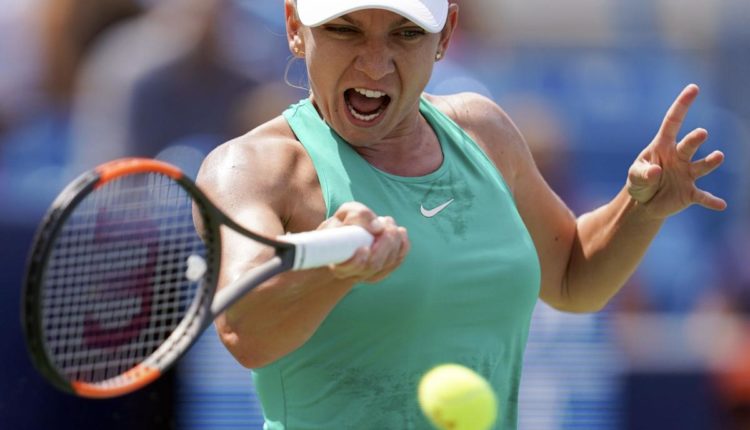 “It was not easy at all,” she said in her post-match press conference. “I knew actually that she’s gonna hit very strong, and her forehand today was pretty, pretty strong. Serve also, 118 miles. It was really tough to return.

“But I knew that I have to stay strong on my legs and just not be very defensive. So I tried to stay as much as possible close to the baseline.”

French Open champion was made to battle against the Slovenian again on Wednesday, winning in one hour and 48 minutes on Centre Court, wtatennis.com informs.

A former World No.35, Hercog used the match with Halep as a springboard to win her third career WTA title in Lugano, and later earned her best Roland Garros result since 2010, shocking No.32 seed Aliaksandra Sasnovich in the opening round before pushing former finalist Sloane Stephens to three sets two rounds later.

“Today was a good day because was, like, up and down a little bit, and also that I was in trouble a little bit in the second set was really good for me.”

In all, she struck an even 21 winners to 21 unforced errors, and converted six of 15 break point opportunities throughout the match. Hercog struck 18 winners of her own, but struggled for consistency, racking up 40 unforced errors in total.

“It’s different because I am different,” she said of her mindset since winning a major title. “I see tennis different now. I see the tournament different.

“My goal is just to be well on court and to try to play my best tennis every time I step on the court. I’m not thinking of the result anymore, but I’m still motivated. So this is the change.”

Up next for Halep is a rematch with rival and fellow former World No.1 Angelique Kerber, who edged past Rebecca Peterson earlier in the day. Halep and Kerber played at both the Australian and French Open last year, with Halep winning both encounters in three sets.

Their last grass court match was at Wimbledon in 2016, where Kerber won in two tight sets en route to the final.

Halep/Olaru through to semi-finals in the doubles

The Romanian tennis players Simona Halep and Raluca Olaru qualified in the semi-finals of the doubles event after defeating 2-6, 6-0, 10-5 the pair made up by Alicja Rosolska (Poland) / Zhaoxuan Yang (China). In the semi-finals, the Romanians will face the pair Kirsten Flipkens (Belgium) / Bethanie Mattek-Sands (US).

Fjørt and Möbius confirmed for the ARTmania 14th edition