The 2018 French Open champion was playing her first final at SW19 (and fifth overall), while Williams was aiming for an all-time record-tying 24th major title and eighth at Wimbledon, but it was the No.7 seed who secured victory after just 56 minutes on Centre Court, wtatennis.com informs.

Halep had beaten Williams just once in 10 previous encounters – and the American avenged that 2014 BNP Paribas WTA Finals Singapore presented by SC Global round robin loss that same week, in the final – but all three of their Grand Slam meetings had gone the distance, including a three-set thriller at this year’s Australian Open. 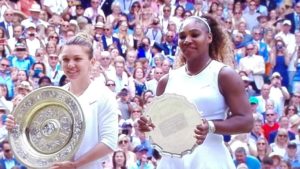 It had already been a revenge-filled fortnight for the Romanian, who made the final with tricky wins over the likes of fellow former World No.1 Victoria Azarenka, teen phenom Coco Gauff, and two nemeses in Zhang Shuai and No.8 seed Elina Svitolina, both of whom led their head-to-heads with Halep ahead of their All England Club clashes.

The first set, in turn, saw the former World No.1 play some of her best tennis of the tournament as she raced out to a 4-0 lead behind some sparkling defensive play. Williams soon got her footing as she cranked in some powerful first serves, but Halep was undeterred, serving out the second on her second opportunity.

Williams began the second set keen to pump herself up, getting on the board early and opening up a 30-30 opportunity on her rival’s serve in the very next game.

Playing to win her second straight major final – and first since capturing that Roland Garros crown last spring – Halep remained focused and kept in front, winning the final four games of the match to ease over the finish line.

It was a pitch-perfect match for Halep, who struck just three unforced errors in two sets – and 13 winners – and converted four of five break point opportunities while allowing Williams just one break point chance on her own serve.

As for the American, she will rue 26 unforced errors and a 68% first serve percentage that helped the No.7 seed get into return games and keep the seven-time Wimbledon winner off-balance throughout.

Looking ahead to next week, Halep is tentatively set to return to the Top 4 on the WTA rankings, having dropped to No.8 after Roland Garros.

Romanian Foreign Ministry, new warning on the bad weather in Greece. Rainstorm alert in Romania, too

Archbishop of Tomis Teodosie embarks on row with Gov’t over St. Andrew’s…