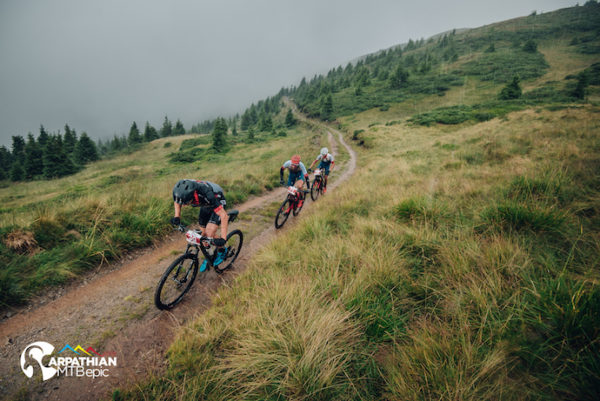 Carpathian MTB Epic 2019 (“CMTBE”), the most important multi-stage MTB competition in Eastern Europe, has reached the finish line. There were 4 days in which world-class cyclists and fearless amateurs who wanted to go beyond their limits lined up at Cheile Grădiștei Fundata, Brașov County, to conquer the Carpathians.

It was a fierce battle between the big favorites, and Tomáš Višňvoský (26) won it. Thus, he became the new Carpathian MTB Epic 2019 champion and won for the second time the coveted title, following his similar victory in 2017. The national champion of Slovakia managed to dominate the competition almost every stage, despite the fact that in the first stage he had a flat tire on the route, which slowed him down and made him arrive just on third.

“It was hard, but nice. It is such a nice country. These mountains offered a wonderful route, with spectacular climbs and descents. It’s a real MTB experience!”, said Višňvoský after finishing the race.

The Women Elite category did not show any surprises, the world champion Ariane Lüthi (36) from Switzerland, last year’s trophy holder and favorite in the race, was ranked first again.

The best Romanian in the last stage and in the overall standings, in the 8th place, is Ede Molnar (23), team Dinamo BikeExpert Superbet, the title champion at XCM and XCE. Molnar had a good evolution in this competition, as last year he made 13 positions lower.

“I can’t wait to return to CMTBE in the future, not necessarily because I want the big title, but especially because I like to compete at the highest level in my own country. I have supporters here, I know the competitors, it is a completely different experience compared to competing in another country”, said the Romanian national champion, after hugging his family.

The race was not easy, and the weather made it even more difficult for the competitors. The total 158 km route prepared for this 4-day multi-stage competition was shortened in the second stage by approximately 8 km, due to heavy rain, for the safety of cyclists.

The cycling elite, world and national champions from 20 countries, fought for the 80 UCI points relevant for the eligibility of the participants in the 2020 Olympics, the event being registered in the calendar of both the Romanian Cycling Federation and of the Union of International Cyclists (UCI) in category S2. The total value of the cash prizes offered was 8.550 euros.

The 1-day Challenge race took place on August 4, on a shorter route, with a length of 43 kilometers and 1.800 meters elevation gain and addressed to passionate cyclists who did not have enough experience for the multi-stage version. The winners are Bulgarian, 18-year-old Alex Ivanov, who said he wants to return next year for the multi-stage competition, and Raluca Cheregi, first in the Women’ category.

Carpathian MTB Epic is organized by MPG Romania, a leading group in sports marketing and sports event management. The team is proud that the competition becomes a tradition and puts Romania on the world map of cycling events.

“We are glad that we have such good feedback from cyclists who have the experience of the most important competitions in the world, and that the Carpathian MTB Epic event rises to the highest standards of organization and brings a memorable experience both due to the wild, untamed environment and also the cultural exchange. Year after year, we have more participants, from all over the world, who enjoy adrenaline at maximum levels and the services offered,” said Tudor Mocuța, director of Carpathian MTB Epic.

The third edition of CARPATHIAN MTB EPIC by MPG meant 4 days of pure mountain biking, with over 150 kilometers of pedaling and 7.450 meters total altitude gain, in the middle of one of the last wild regions of Europe. The unforgettable experience of the participants was complemented by the all-inclusive services, which covered everything, from the accommodation in the Olympic-level resort to the Race Village from Cheile Grădiștei Fundata, various meal options and complete services, for relaxation, but also for maintenance of the sports equipment.

Ana Maria Popescu, named for the fifth time the best swordswoman in the world

In the Hands of Luck – A Guide to Handball Betting