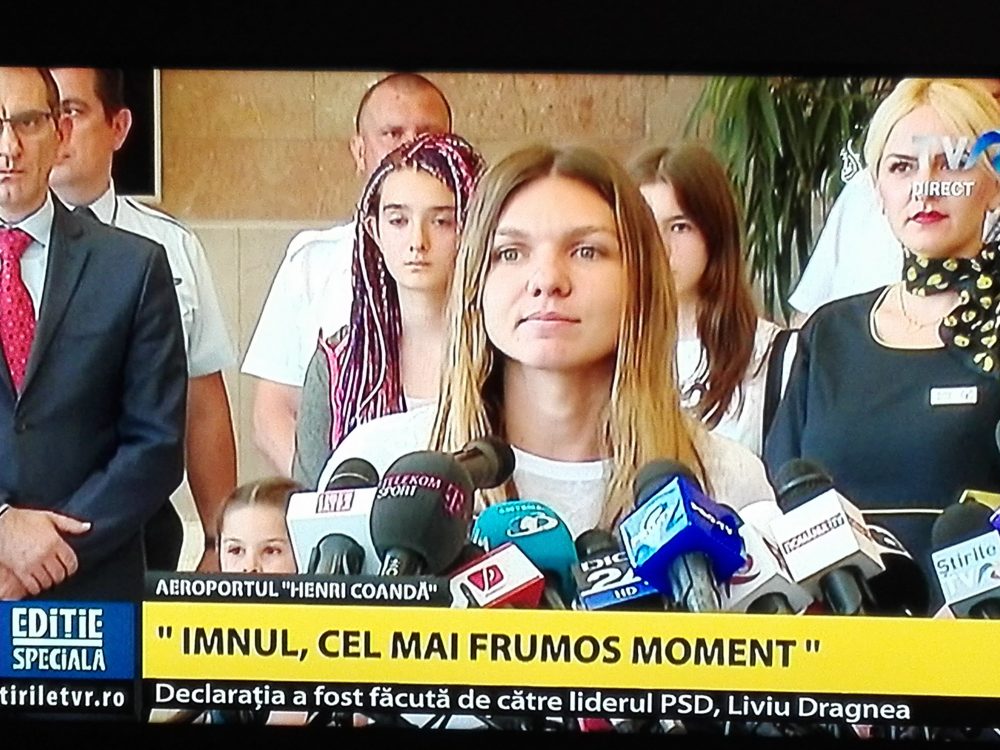 Update-Simona Halep, back in Romania: Tens of thousands acclaimed her on National Arena, Bucharest mayor booed

Romanian tennis player, the new WTA world no.1 Simona Halep has arrived in Romania on Monday after winning Roland Garros title, also bringing the replica of the trophy embodying the first Grand Slam title in her career.

At least 20,000 fans acclaimed Simona on the National Arena in Bucharest on Monday evening, the location where she presented her trophy. The event started with singers Monica Anghel and Marcel Pavel singing the national anthem, along with all the people who came to cheer Halep.

However, the spectators protested when Bucharest mayoress Gabriela Firea handed out a plaque and a big bunch of flowers to Simona, booing the mayor and preventing her from speaking.

The audience has though resumed the cheers when Simona Halep started talking. “Even if I come from a smaller country, big performance can be achieved,” said Simona. “I would not like to get off that stage anymore, it’s a very beautiful moment,” she continued.

Later on, mayor Firea harshly retorted on her Facebook page, claiming that “the Soros propaganda machine, through its mass media tributary tools, has started the action to compromise the event”.

Warm welcome for Simona at the airport

Welcomed by hundreds on the Otopeni airport, including no least than 100 journalists, Simona Halep has been visibly touched by the cordial reception, thanking all for their support and saying this trophy doesn’t belong just to her, but also to Romania and her fans.

„I thank all those who laid a brick to this, to may family, to all the fans who are mostly important, I had a special atmosphere during the finals, I think I am the player boasting them most numerous supporters at all matches. It is always good being home, I am happy I returned home. It is my trophy, but also the trophy of my fans and of Romania,” she stated.

Halep pledged that her career will not stop here, as she wants to win much more trophies. „I will be the same, the desire is as strong as before,” she pointed out, adding that both Darren Cahill and Ion Tiriac have told her she is able to win that trophy at Roland Garros and advised her to play the way she knows it best.

Simona also confessed she only slept for just three hours after the great victory, so she announced she would take a break the coming days, to spend time with her family and friends. „I will do nothing special. I will go home (our note: to Constanta), I will see my friends and spend time with my family”.

Simona also had an advice to give to all young Romanian athletes: „The only thing that I could say is that you must not give up. I lost three finals, but I didn’t give up and I desperately believed that it is possible one day. My thought for all athletes would be to fight”.

She also revealed what has been the most beautiful moment right after the final: „The most beautiful moment was  when the national anthem had been sung. I was nervous, I had tears in my eyes for people would not cease to encourage me. Besides, after I left the court, I found out that no national anthem had been played that way at Roland Garros so far.”

The ceremony held on National Arena in Bucharest has been motif for political disputes earlier in the day.

Independent deputy Nicusor Dan, former leader of USR, has accused Bucharest mayor Gabriela Firea that she had denied Simona Halep’s request to present the trophy in a square in Bucharest and meet her fans there.

“In exchange, the City Hall has offered her the external stairs of the National Arena for this event. We have to remind you how the great champions are welcomed across the European capitals, how the meetings with the fans are organized on the street and in the squares (…) The National Arena seems to be hosting grand events, but the PSD ones,” Nicusor Dan argued.

There have been some surprises for Simona Halep from the moment the “Alexandru Ioan Cuza” aircraft has landed in Bucharest. The plane has been sprayed by two fire trucks out of respect for bringing the Roland Garros champion back home.

Moreover, the traffic police has planned a prank on Simona, with policemen stopping her car after she had left the airport and fining her, for “exceeding the legal backhand speed”.

“We have a request for the young lady back there. First, congratulations. This year we decided to sanction you for exceeding the legal backhand speed in Paris. We caught you with 172kmph. But we don’t give you anymore points, as you have enough obtained in Paris,” the traffic police officer said as a joke.

Annual inflation rate up to 5.41pc, highest level since February 2013

Monastery abbot, the second high-ranking churchman who dies in Romania of COVID-19