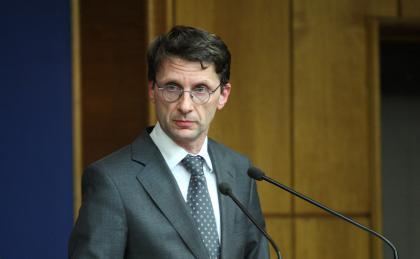 BNR warning: The impact of the ‘tax on greed’ can be significant

National Bank of Romania (BNR) spokesman Dan Suciu says the impact of the “tax on greed” on credit can be significant if it is approved in the proposed formula.

“We do not have yet an assessment of the impact of these measures (the so-called tax on greed or the tax on the banks’ and NFI’s assets – editor’s note) because BNR has learned of these proposals only when they were formally announced. But the impact on credit could be significant if the measures are approved in the proposed formula – especially as it is associated with the legislation recently adopted by the Parliament – a careful research is needed. Moreover, the banks already say it will have impact on credit, and financial intermediation is already low,” Dan Suciu said on Friday.

Finance Minister Eugen Teodorovici announced on Tuesday that banks will be differently taxed, according to ROBOR (Romanian Interbank Offer Rate). The higher the index is, the higher taxes will be, says the new tax, called “tax on greed”.

The Fin Min announced this measure among other several fiscal measures envisaged for 2019, such as the EUR 10 billion investment fund, the decrease of taxes in constructions, but also the controversial decision to take the “vice tax”, which encompasses money normally intended for the investments in hospitals and to the big healthcare programmes to counter chronic diseases, and redirect it to the state budget to cover for the state employees’ salaries and for other expenses in the central administration.

He also announced the capping of the gas price for a three-year period: RON 68 megawatt/hour. The measure will apply until February 28, 2022.

In the case of Pension Pillar II: Funds can invest in public-private partnerships; administration fee drops from 2.5% to 1%; the second commission of 0.05% of the assets changes according to the fund’s performance; a person may withdraw the money, but not earlier than 5 years, and the withdrawal fee is 2% of the assets.

Weather warning for mixed precipitations in northern half of Romania, Code Yellow in north-western counties

592 new cases of coronavirus in Romania in the past 24hrs

Greece announces new rules at Kulata customs: Tourists must have a negative COVID-19…

592 new cases of coronavirus in Romania in the past…

Romanian passengers who travel to the Netherlands, not…